Glasses Are Not A Fashion Accessory!

With the unlimited number of styles, shapes, and sizes of glasses available today, you would be forgiven for mistaking glasses as a fashion statement, rather than what they really are—a type of vision correction equipment.

When glasses or ‘spectacles’ were first introduced to the market, they were described as ‘medical appliances’. Those who wore glasses had a really good reason for doing so—nearsightedness, farsightedness, astigmatism—as they weren’t socially accepted.

Soon after inventions such as ‘scissor spectacles’ started to appear—a device commonly used by men and women who did not wish to disclose their medical condition publicly. George Washington and Napoleon Bonaparte both owned pairs of scissor spectacles.

The success of scissor spectacles saw the rise of ‘Lorgnettes’—a pair of glasses with elaborately designed handles, often disguised into everyday objects such as fans and mechanical pencils. Those who could afford to found such designs which complemented their lifestyle: jewellery, ear trumpets—anything to avoid having glasses on their faces.

In the 1800s, glasses became a symbol of old age and infirmity, lorgnettes became more popular and were found in a whole manner of objects, and people only wore their glasses when absolutely necessary. 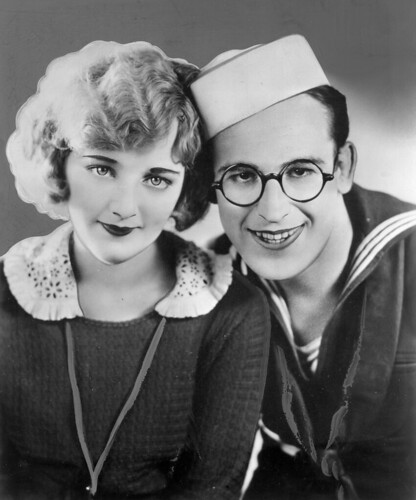 Glasses as a fashion statement

The 1900s saw a big change in eyewear as Hollywood and celebrities began to influence fashion, and newer, cheaper materials became available—particularly plastic. The piece of vision correction equipment became a whole industry in itself, and as the 19th century came to an end, eyeglasses were a common and even sought after piece of fashion.

One Hollywood actor in particular—Harold Lloyd—had a large impact on the rise of glasses as a fashion accessory as he became known for his tortoiseshell spectacles with large, round lenses. His films and photos started a fashion craze for the style of glasses which are still popular to this day.

The acceptance of corrective eyewear in mainstream fashion was a huge leap forward in realising social equality for all. However, unlike other conditions which have not seen the same advancements in treatment, poor vision can now be corrected, and spectacles as a piece of vision correction equipment are now beginning to become a thing of the past.

Here at london Vision Clinic, 96% of our patients receive ReLEx SMILE or LASIK surgery. LASIK is the most common form of laser surgery with over 90% of patients being eligible for the procedure. ReLEx SMILE—pioneered here at the London Vision Clinic—is a new, minimally-invasive procedure which is used to treat patients who are short-sighted, have high prescriptions, or suffer from dry eyes, contact lens intolerance, and thin corneas.

To find out if Laser Vision Surgery is right for you, and which procedure fits your needs, the best thing you can do is book a consultation with one of our vision specialists.

In the meantime, if you would like to find more information on our vision correction options, you can visit our treatments page or leave us a comment below.